Home TherapySpark Treatment Trends Football Concussions: Is the Ivy League on to Something Revolutionary?

Football Concussions: Is the Ivy League on to Something Revolutionary? 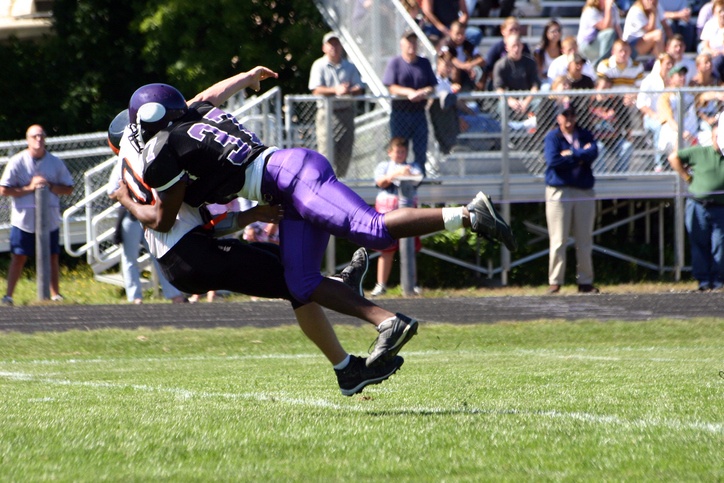 In my days as a practicing Athletic Trainer, concussions were always on mine and our coaches’ radars. I would spend a great deal of time preparing for and managing our school’s concussion protocol. Yes, there were other injuries and administrative responsibilities to handle but the dreaded ‘c word’ was a constant concern. Despite safety measures, concussions were still a fairly common injury. But that may be changing, at least for football concussions.

According a study published last month, Ivy League schools have tackled the concussion issue in their football program. Thanks to one change to the kickoff rules, their football concussion rates have plummeted.

How the Ivy League reduced concussions by 82%

In 2015, kickoffs accounted for 6% of all plays in the Ivy League. Yet, 21% of the reported concussions occurred during this play. As a result, the coaches of these eight schools decided to make one significant change for the 2016 season.

That change was moving the kickoff line from the 35 to the 40 yard line in hopes of increasing the number of touchbacks where the ball is not advanced by the receiving team. With this change, their concussion rate dropped from nearly 11 per 1,000 kickoffs to only two per 1,000.

The Ivy league is looking to implement further changes as well, but their forward and independent thinking could lead to collegiate level change across the nation. Other leagues continue to use the 35 yard line for kickoffs, although a future change has been proposed by the NCAA for the 2019 season.

Leading up to this discovery, other sports organizations have continuously worked toward mitigating the risk of concussions. Sports panels, school boards, medical symposiums, researchers and athletic trainers have joined the cause to keep athletes safe.
In the past decade, a significant amount of resources has been dedicated to finding ways to reduce the risks of concussions at all levels and in all sports, especially football.

For example, collegiate football leagues have taken serious measures to reduce the risk of concussions. Most notably, “Targeting” penalties have been created to reduce the opportunities for unprotected players to be hit in the head. This is a severe penalty as it will also result in the player penalized being ejected for the equivalent of an entire game.

“Spotters” have also been added in to the mix. During the course of every play, these spotters will be able to view the entire field and determine when the game must be stopped for a player to be further evaluated by medical personnel.

In addition to collegiate leagues, the National Football League has also dedicated resources to reducing concussions. The NFL has dedicated over $200 million to independent research in medical and neuroscience. These studies aim to bring improved equipment, better diagnosis, and more detailed treatment programs. The NFL has also implemented 47 rule changes since 2002 that are designed to increase player education, improve practice conditions, and strengthen the league’s medical protocols.

One of these recent rules also changed the kickoff procedure to reduce the number of concussions. In 2011, the kickoff line was moved up to the 35 yard line.  Reports show a nearly 30% increase in touchbacks and 40% fewer concussions.

To add further to the kickoff rule, the NFL implemented additional changes this season when they discontinued the ability for the kickoff team to get a running start. Perhaps, with further tinkering, the kickoff could remain an exciting play but with lower risks. Or, perhaps the kickoff as we know it is slowly on its way out.

Who’s most at risk for a concussion?

As we’ve seen, sports are a highly likely source of concussions. In fact, the National Institute of Health reports that sports and recreational activities account for two to three million concussions per year.

Most commonly, a concussion will occur in sports or activities where there is contact to the head. Though the brain sits inside of a gelatin fluid substance called cerebrospinal fluid, the force can sometimes be so great that the brain makes impact with the protective skull. This impact can damage various regions of the brain and create both short and long-term consequences. Multiple concussions can eventually lead to permanent damage.

To better describe a concussion, the CDC and other sources use the term, “Traumatic Brain Injury” or TBI. This term more accurately reflects the nature of the injury that occurs. A TBI can occur in day to day life, but is most commonly associated with sports. A fall at home or an object falling out of a cupboard can just as easily create an injury to the brain.

More attention in recent years has been given to concussions than any other injury and rightfully so. Even a new term has come in to our day to day terminology: chronic traumatic encephalopathy as a result of further attention and research. This condition was made more famous by the 2015 movie based on real events and starring Will Smith, Concussion.

In the movie, Dr. Bennet Omalu investigated the unexpected death of Mike Webster, a former NFL lineman and Hall of Famer for the Pittsburgh Steelers. He discovered certain protein enzymes in the brain that characterize CTE. Further research revealed that Webster suffered severe brain damage as a result of repeated head trauma.

Continuing his research, Dr. Omalu discovered that three other players (Andre Waters, Junior Seau, and Terry Long) also died with symptoms of CTE. After years of legal battles, Dr. Omalu was instrumental in leading the NFL and CDC to further investigate how head trauma could lead to long term health dangers.

Football continues to be one of the most exciting and most watched sports in the United States and is picking up in popularity abroad. Along with its rising popularity comes public scrutiny for the health risks associated with playing. This scrutiny will hopefully push teams at all levels to implement new strategies that make the game safer for players. Ongoing research and rule changes to reduce concussions in football will only have a positive impact on future generations of football players.

The Most Important Safety Measure in Football