Watching any sporting event, you can see the hard work the athletes put into each step. You know the athletes have trained for hours, perfecting their skill. But did you know that researchers and therapists may have also put hours into training the athletes?

Long before the competition takes place, athletes train until the sport is second nature. For parathletes, this sometimes means re-learning the sport after serious injuries.

Researchers from the Sport Performance Center at the AECC University College recently set out to develop testing and training methods for para-Nordic skiers. Along the way, they navigated some unexpected obstacles and disproved their own expectations about the body mechanics of Nordic skiing.

Phillip Heritage, MS, PGC is one of the researchers involved with the project. With his MS in Applied Sport and Exercise Physiology, he has extensive experience in athletic research.

His team began the project by breaking down the movement components in para-Nordic skiing. Depending on their capabilities, parathletes are usually seated in a chair with skis attached. They use poles for forward movement.

After studying the mechanisms of the sport, they identified key performance indicators (KPIs) for the parathletes. With these KPIs in mind, they created exercises to measure them using the BTE Primus. 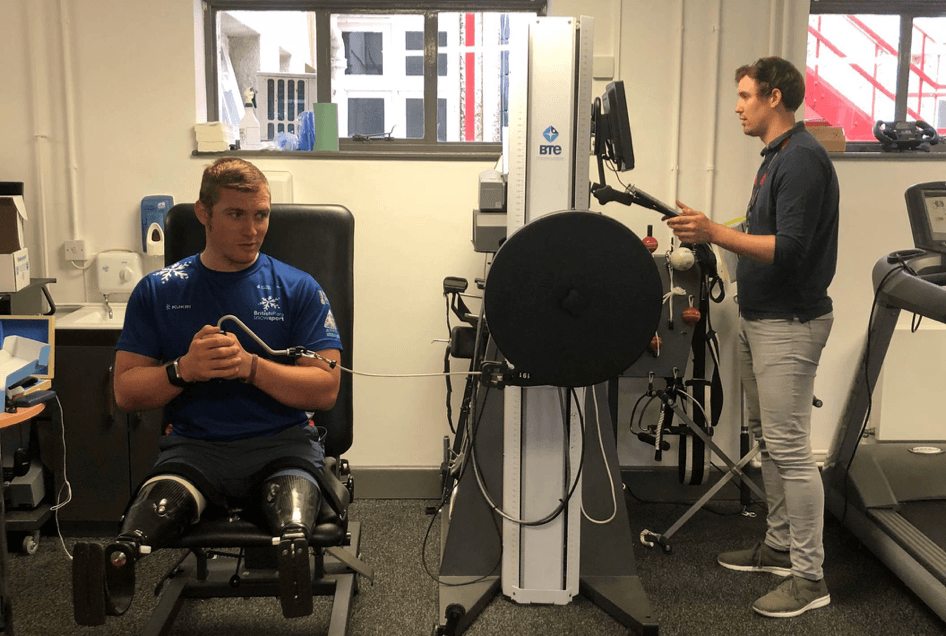 The researchers chose the BTE Primus for its adaptability and data tracking. With its multiple attachments and movement settings, the Primus was easily adaptable to precisely mirror the sport, and accommodate the parathletes’ capabilities.

Specific to research, the Primus provided objective data for each parathlete. The data records allowed researchers to study the parathletes’ progress over time and make objective comparisons.

For example, the researchers used the arm crank attachment to create an ergometer. This specialized application of the attachment and objective data collection allowed them to create a step protocol.

According to Mr. Heritage, the Primus’ key advantage for this project was its controlled passive motion (CPM). This movement setting helped parathletes target muscle activation and precise control for neuromuscular reeducation. With the Primus, athletes get visual feedback as they learn to control their movement to hit a target range on the screen.

Working with parathletes presents a unique challenge. Since no two impairments or injuries are exactly alike, it can be difficult to predict the athlete’s capabilities.

The researchers knew of the parathletes’ conditions ahead of time, and developed the assessments accordingly. But the process took some unexpected turns once they met in person.

One athlete had a double amputation above the knee. The other survived a brain hemorrhage, resulting in very limited movement on one side.

Throughout the project, the researchers, parathletes and coaches worked together to adjust the exercises. These on-the-spot changes helped make the simulation more realistic and more accommodating to the parathletes’ capabilities.

For example, the researchers had set up the Primus for forward movement using one pole. This choice was based on the groups’ background research before meeting with the parathletes. But they were used to using two poles. With the group’s creativity and the Primus’ adaptability, they were able to alter the equipment set up.

While studying turns, the group made a discovery. One parathlete’s amputation made one leg stump longer than the other. They expected him to be better at turning toward the longer side, using it as an anchor. But, he was actually stronger turning toward the shorter side.

As it turned out, the contralateral leg – not the leg he was turning toward – acted as an anchor. It kicked back to balance during the turn. That surprised everyone!

Phillip and his team will continue developing the assessment as they gain experience with more parathletes of different abilities. This stage is the beginning of a long-term project, potentially expanding to other sports and the Olympics.

For more outcomes from this project, check out Philip Herritage’s article on LinkedIn.

Inside the NBA Bubble: BTE Eccentron is Essential to Players’ Performance

10 Low-Cost Upgrades for Your Clinic